THE STORY OF BLUE REVOLUTION HAWAII 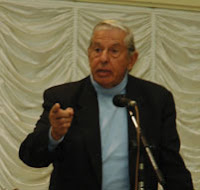 Ostensibly, there is no real beginning for the Blue Revolution, as innumerable marine pioneers over the past century have contributed to this progress.   Let us begin in 1972, forty years ago, when Hawaii ocean engineer John Craven (left above) and Japanese architect Kiyonori Kikutake built a model of a floating city and towed it to Kaneohe Bay.  Alas, it sank, and remains rusting away.  John went on to found the Natural Energy Laboratory of Hawaii in 1974, while Governor George Ariyoshi the adjacent Hawaii Ocean Science and Technology Park in 1985.  In 1990 the two were combined into the Natural Energy Laboratory of Hawaii Authority (NELHA): 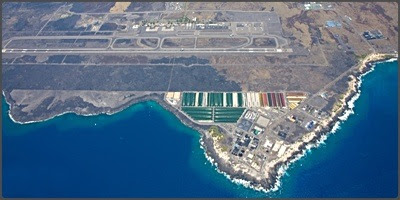 There are a few who wonder if this was wise, as now NELHA needs to assure that every project is self-sufficient.  For a field so formative, there has to be a vibrant R&D component to solidify the science and engineering, and cultivate new ideas and pathways.  The Pacific International Ocean Station, described in a 3June2012 posting, is the open ocean extension of NELHA, except that the early focus will be on technology transfer, with opportunities for free enterprise activity. 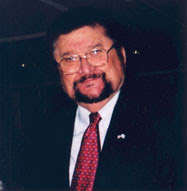 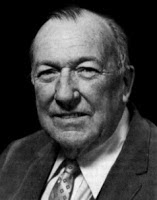 Early insights came from Spilly Spilhaus (left), founder of the Sea Grant Program, with his dreams about colonization of the ocean, and Joe Vadus (right), chief ocean technologist of the National Oceanic and Atmospheric Adminstration, who had the drive and imagination to dream about what could be.

The first real piece of hardware that actually worked on the open ocean was Mini-OTEC off NELHA at Keahole Point, Hawaii, in 1979.  Jim Wenzel and his Lockheed crew were the first to attain net positive for ocean thermal energy conversion (OTEC).

Patrick Takahashi had just joined the staff of U.S. Senator Spark Matsunaga, and he helped draft the original bill for OTEC R&D.  The legislation was enacted in 1980.  The language suggested 10,000 MW by 1999.  During this same period, U.S. Senator Dan Inouye also succeeded in passing legislation to stimulate the commercialization of the technology.  Well, advancements have been elusive, for there is exactly zero MW operating today.  However, click on the current state of development, as there is newfound reason for some optimism.  Of course,  while OTEC is the necessary natural energy source, it is only an element of the Blue Revolution.

Chapter four of SIMPLE SOLUTIONS for Planet Earth is on the Blue Revolution, while the Huffington Post has published three articles on the subject:

The Dawn of the Blue Revolution

The Blue Revolution is the Optimal Solution for Japan

In a nutshell, while the Green Revolution merely led to an expansion of grain production, the Blue Revolution shows promise as the next major opportunity to produce clean energy, marine biomass plantations, next generation fisheries and other co-products, while remediating global warming and preventing the formation of hurricanes. 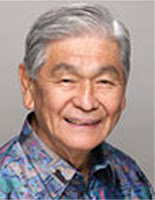 So back to the history, in the early to mid-80's, Paul Yuen and Pat enlisted the assistance of Fujio Matsuda (left), who was then president of the University of Hawaii, and George Ariyoshi (right), who was governor of Hawaii, to create the Pacific International Center for High Technology Research (PICHTR) as a partnership with Japan to establish in Hawaii a clean technology transfer organization to complement university research for the benefit of the Pacific Islands and World.  PICHTR succeeded in attaining net positive in 1992 with a 210 kW open cycle OTEC experiment at NELHA.

In 1991, Pat co-authored a presentation on the Blue Revolution by Hawaii Senator Richard Matsuura (left) to the The First Very Large Floating Structures Conference held in Honolulu.  In 1992 Senator Dan Inouye (right) published in SEA TECHNOLOGY The American Blue Revolution.  During this period, Joseph Vadus and Pat co-chaired a workshop in Kona, where the participants came to a conclusion that a 100,000 square foot (one hectare) floating platform could be built for $500 million, half the cost of one B-2 bomber, with a target date of the Year 2000.

The notion of half a billion dollars scared funding agencies and congressional staffers.  So a decision was made to pursue specific marine bio-product and ocean enhancement pathways, which someday in the future could be integrated unto a floating platform.  It was left to the private sector to develop OTEC.

Stan Dunn of Florida Atlantic University and Pat co-chaired a workshop at the headquarters of the Department of Commerce in D.C. in 1993 to prepare a feasibility plan for the design, construction and operation of a fleet of OTEC-powered plant ships to retard the formation of hurricanes.    They published a paper entitled Artificial Upwelling for Environmental Enhancement.

The University of Hawaii was selected as the National Science Foundation Marine Bioproducts Engineering Center in 1998 with funding of $12 million.  The primary focus was on marine microorganisms to produce high value biopharmaceuticals and nutraceuticals.

In 1999, a team led by Fujio Matsuda, Joe Vadus and Pat wrote in SEA TECHNOLOGY on The Ultimate Ocean Ranch.  PICHTR hosted several next generation fishery workshops and summits, in Honolulu (1997), Tokyo (2004) and Bergen (2005), the latter resulting in the Bergen Declaration for Next Generation Fisheries.

In 2003 Pat was invited by the United Nations to address the Intergovernmental Oceanographic Commission to gain international cooperation for the Blue Revolution.  While interest was high, funding proved difficult, and the operative term then was something closer to the Blue Evolution. 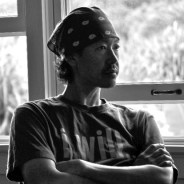 Integrating the above, the timing was ideal to create an organization with the vision and capability to take all this knowledge to the next level, as indicated in a tribute to Guy Toyama by Pat in his Daily Blog:

Guy's legacy might well be Blue Revolution Hawaii and the Pacific International Ocean Station.  A couple of years ago, we were having lunch in Kona when he mentioned how billionaire Gordon Moore had provided funds to initiate the Thirty Meter Telescope Project.  As Guy had an office at Keahole Point at the entrance of the NELHA, why not the Blue Revolution with support from a billionaire?  Thus was born Blue Revolution Hawaii, which proposed the Pacific International Ocean Station.  Guy created the presentation for PIOS, which I presented at the Seasteading Institute's conference in San Francisco.

Leighton Chong came on board as the third Blue Revolutionist.  He and Guy took on the leadership role to organize Blue Revolution Hawaii.  The two made presentations in Japan and China and met with potential partners in those two countries.  The original board included Fujio Matsuda and John Farias.  Our two annual dinners with advisors: 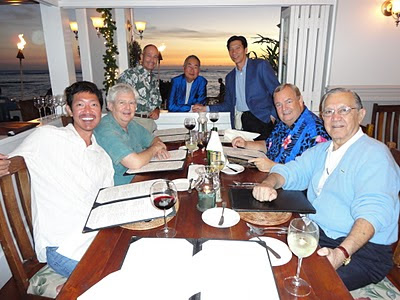 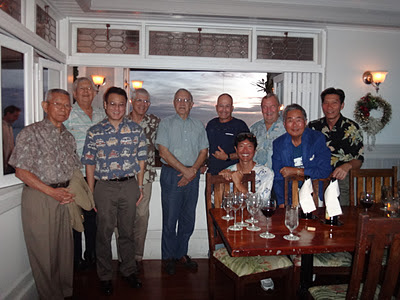 The Board meeting today of Blue Revolution Hawaii at the Plaza Club: 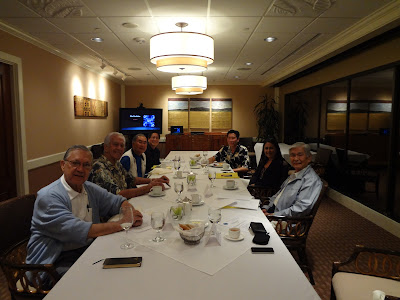 So the story of the Blue Revolution can only be introductory and the mission of Blue Revolution Hawaii is only beginning.  Space became passe when the Cold War ended.  The next great opportunity for humanity is to develop the riches of the seas in harmony with the marine environment.  Hawaii is in the middle of the largest ocean, and the ideal site for the Pacific International Ocean Station (PIOS).  For only 1% the cost of the International Space Station (left, ISP, which has expended $150 billion), PIOS can serve as the platform from which can come sustainable fuels, ultimate ocean ranches, marine biomass plantations, Disney-at-Sea and, someday, floating cities.  Pictured below is Shimizu Corporation's Green Float, a future phase which could well begin with PIOS: 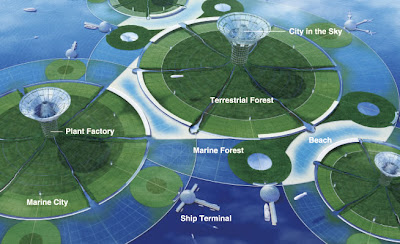