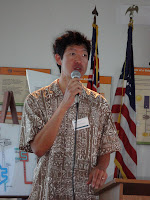 Two board members of Blue Revolution Hawaii played important roles in the 11-12 September 2011 Ocean Energy Workshop of the Hawaii-Okinawa Clean Energy Task Force.  Guy Toyama organized the event at the Gateway Center of the Natural Energy Laboratory of Hawaii Authority (NELHA) at Keohole Point on the Big Island of Hawaii.  Patrick Takahashi assisted as a facilitator. 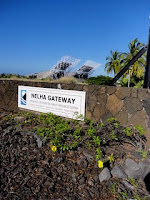 The gathering, had a larger mission, but very early in the discussion discarded wavepower and  other marine options to focus on ocean thermal energy conversion (OTEC).   For the first time, ever, all the key principles of OTEC convened and said all the right things to assure for the future of this technology.
The event opened with a Hawaiian prayer (pule) and welcomes by County of Hawaii Mayor William Kenoi and Kumejima Town Mayor Choukou Taira.  We learned a new word, Haisai, which is aloha in Okinawan.  Most of the locals dressed in Aloha shirts, while many from Okinawa wore their equivalent, Kariyushi wear.
Below, Okinawa Prefectural Maritime Deep Ocean Water Research Station: 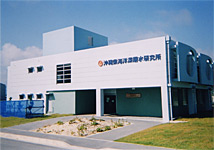 Reaffirmations of the Hawaii-Okinawa clean energy cooperation objectives were provided by Desikan Bharathan from the National Renewable Energy Laboratory of the U.S. Department of Energy, Andrea Gill for the Governor of Hawaii and Takahiro Yabe from the New Energy Development Organization of the Ministry of Economy, Trade and Industry.  Various technical presentations were made by Will Rolston (County of Hawaii), Yasuyuki Ikegami (Saga University), Tomoyuki Yoza (Kumejima Town), Shin Okamura (Xenesys), Gary Barbour ("new" executive director of NELHA) and Jan War (NELHA).  Panels from Japan (IHI, Kobe Steel, Yokohawa Electric Corporation, Saga University and Xenesys) and the USA (Makai Ocean Engineering, Lockheed Martin, NREL and the University of Hawaii) detailed the promise of OTEC.  Representatives from Ocean Thermal Energy Corporation and OTEC International were prominent in the discussions.
The sister city signing ceremony was particularly memorable, with Mayors Kenoi and Taira: 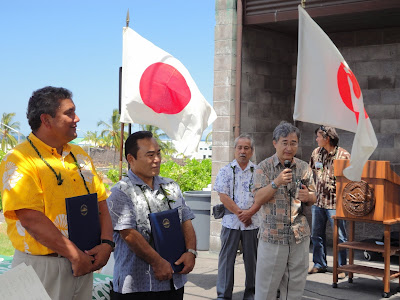 The list of participants was impressive, but I won't mention who they were for fear of leaving someone out.  Maybe you'll see them somewhere in the signing ceremony: 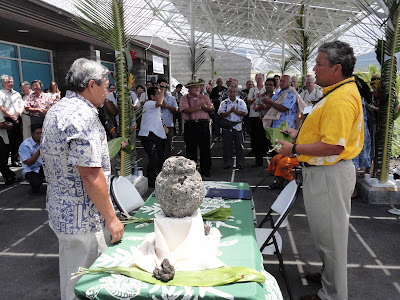 First, some history, for off the coast of NELHA was where the first net positive experiment was conducted by Lockheed on Mini-OTEC in 1979: 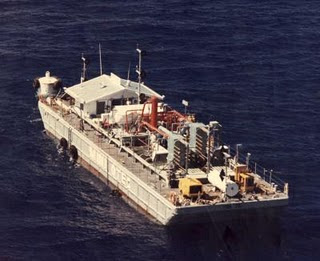 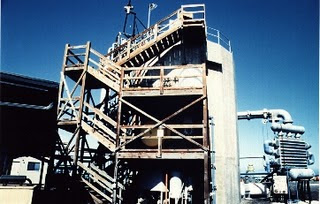 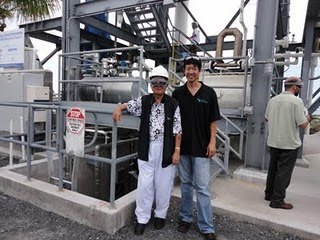 Installed seven years ago was a 55 inch pipe, designed for a 1 MW OTEC power plant, with Noriko standing next to a cross section: 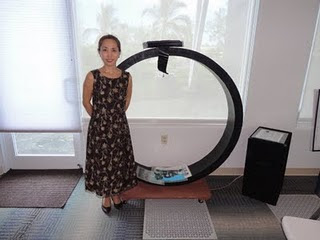 These two pieces of hardware are mentioned because the conferees came to a conclusion that the earliest priority is to install a turbogenerator and new pumping at the test tower so that up to 100 kW of OTEC electricity can be generated.  This enhancement could cost $5 million, and, most importantly, show the world that ocean thermal energy conversion is, indeed, producing net power.
In parallel, planning should proceed to utilize the waters from the 55 inch cold and surface pipes to generate half to one megawatt of electricity.  It is possible that more than one OTEC system can be accommodated to operate in parallel to assure for success and provide a test bed where OTEC components can be tested.
Also discussed was the next stage, a 5-10 MW floating prototype, which could well break even economically.  Finally, part of the visioning included a 100 MW commercial OTEC plantship.  It is becoming more and more clear that "The Blue Revolution is the Optimal Solution for Japan."  A posting suggesting a similar opportunity can be found at "Blue Revolution for Germany."
Finally, finally, OTEC appears to be making progress.  We hope to see two operating OTEC systems at NELHA within a couple of years and a third net-positive OTEC facility at Kumejima (below) in this same time frame. 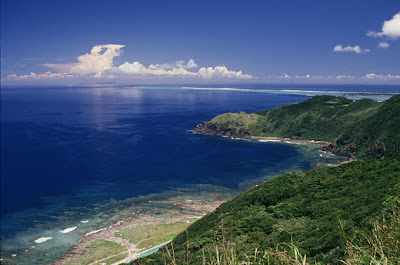