However, there remains a conservation ethic regarding the marine environment, as underscored in a publication released today by the International Program on the State of the Ocean:
'Shocking' Oceans Report Warns Of Impending Mass Extinction

The preliminary report from the International Programme on the State of the Ocean (IPSO) is the result of the first-ever interdisciplinary international workshop examining the combined impact of all of the stressors currently affecting the oceans, including pollution, warming, acidification, overfishing and hypoxia.
The participants were mostly preservationists, so caution can be expected.  Yet, if you read the details, the Blue Revolution actually can be applied to ameliorate those identified impacts.    This attitude of "let us protect the ocean" is indoctrinated through the K-12 levels, because science teachers tend to be anti-development.  This mentality prevails through college and graduate school for most of the courses are taught by ocean scientists, and their interest is to measure, monitor and model, not to commercialize.
However, the oceans now are being re-considered for renewable resources, and jet fuel, in particular has become a priority for the U.S. Department of Defense.  Thus, a report from the Pacific Northwest National Laboratory on:
Microalgae as a Biomass Feedstock
is worthy of close scrutiny, although no mention was made of any link of macroalgae to the effluents from Ocean Thermal Energy Conversion (OTEC).
To summarize:
1.  The United States has the largest Exclusive Economic Zone (the 200 nautical mile region surrounding land--about 30,000,000 square miles, of which 85% is in the Pacific--in comparison, the land area of the USA is close to 25,000,000 square miles).   Thus, the U.S. has more seawater than land ownership.  France is #2, followed by Australia, Russia, UK, New Zealand, Indonesia, Canada, Japan and Chile.  Thus, all these countries (UK through Commonwealth countries) touch the Pacific.

2.  To quote from the above PNNL publication: 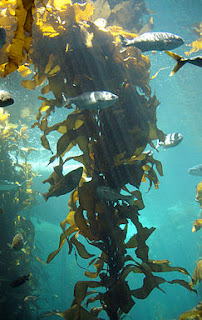 The photosynthetic efficiency of aquatic biomass with an average 6 to 8% is much higher than the average photosynthetic efficiency of 1.8 to 2.2% for terrestrial biomass (Aresta et al.,2005a).
Thus, a rough average is that aquatic biomass is three times more efficient in converting sunlight into mass than land crops, where there is no additional cost for irrigation, plus the fertilizer is free if the effluent from an OTEC facility is used.  Note that where there is macroalgae, there is also fish (left from Monterrey Bay).
3.  Japan has two major macroalgal projects:  the Mitsubishi bioethanol from seawater project and the Ocean Sunrise Project.  The UK/Ireland has the Biomara Project.  The USA has no comprehensive project.
5.  An excellent online reference is produced by Oilgae.
6.  Go to Bio Jet Fuel to learn more about this subject.
While the sensible option for terrestrial biomass is the biomethanol economy using the direct methanol fuel cell for transportation applications, when it comes to macroalgae, as the moisture content is higher than 80%, it is possible that hydrolysis and fermentation might well argue for ethanol as the final product.  Historically, methane has been favored as the fuel, and if this pathway dominates, then conversion to methanol is a mere step away using a

catalyst.  There is a more recent tendency, though, to use fermentation to produce isobutanol (right), a four carbon chain alcohol, as linking two of these molecules can produce bio-gasoline, adding one more molecule (12 carbon chain) gives jet fuel and yet another to 16-carbon diesel.
To maximize hydrolysis/fermentation operations, yeasts and microorganisms capable of sea or brackish water tolerance would be desired.  Thus, to advance this field, extensive research and development will be required in the genetic engineering of conversion science, ocean engineering of optimal macroalgal farms at sea and next generation catalysts to convert methane to methanol or isobutanol (or butanol) to gasoline and jet fuel.
There is every reason to believe that production costs of $3 can be attained, and, perhaps, even $2/gallon.  For Hawaii, then, the advancement of open ocean macroalgal plantations and discovery of a magic catalyst to produce jet fuel from methane or butanol should be of particular priority.

As microalgae is even more efficient than macroalgae, research should also be expanded on the production of biofuels from these microorganisms. The ocean engineering of this system in the open ocean will be a particular challenge.
The systems analysis of the Pacific International Ocean Station is especially crucial now to justify  funding for this project.  Compelling documentation can solidify the partnership of academia, government and the private sector, and to also gain the participation of international interests.
-
Posted by John Farias/ Dante Carpenter / Patrick Takahashi / Matthew Matsunaga / Leighton Chong / Kaiu Kimura / Benny Ron at 4:17 PM