ENGINEERS AND ARCHITECTS OF HAWAII 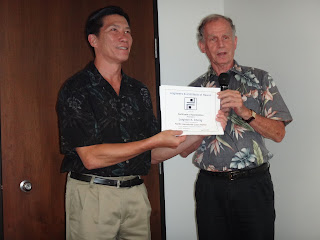 Leighton Chong today made a presentation on the Pacific International Ocean Station to a capacity crowd of the Engineers and Architects of Hawaii at the TOPA Tower in downtown Honolulu. To the left is a photo of Leighton with the president of the organization, Howard Wiig, of the Hawaii Department of Planning, Economic Development and Tourism.  EAH was founded in 1902.

Title: Proposal For a Pacific International Ocean Station in Hawaii

71% of our Earth’s surface is water, and 80% of the heat of the Sun reaching Earth daily is stored as thermal energy in the oceans.  Ocean thermal energy conversion (OTEC) can supply clean energy as well as food and water for mankind’s needs.  In-ocean research is needed to answer environmental, sustainability, climatological and economic feasibility questions whether and under what circumstances OTEC energy, food, water, and marine co-products processing can be sustainably and beneficially undertaken on a large scale.  Blue Revolution Hawaii, as presented by its COO & Counsel Leighton K. Chong, advocates building a Pacific International Ocean Station (PIOS) in Southwest Hawaiian EEZ waters as an in-ocean host platform for international cooperative research.  If successful, it could serve as a prototype for eventual large-scale ocean resource production facilities in a U.S. Marine Special Economic Zone (MSEZ) and, ultimately, a model for global ocean resources and economic development.