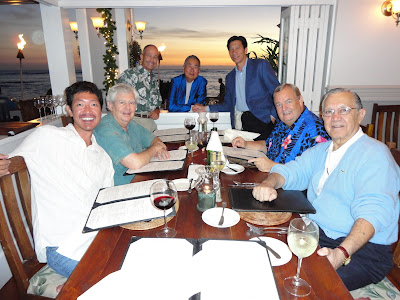 Blue Revolution Hawaii was launched last night at a dinner inviting key supporters at the Ocean House Restaurant.  Organized by Leighton Chong, Chief Operating Officer and General Counsel for Blue Revolution Hawaii, with Guy Toyama as Headquarters Chief and yours truly serving as Lead Visionary, John Farias, Ken Sanders, Bill Spencer and Benny Ron joined us to discuss the future of the enterprise.  How's this for dedication:  both Benny and Guy ran the Honolulu Marathon today, and still looked good at this inaugural event.  Leighton provided the background and mission: 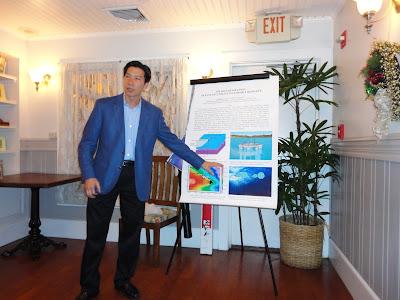 I might add that there is a fourth member of the original team, Sheridan Tatsuno, who is from California, pictured below with Leighton and me: 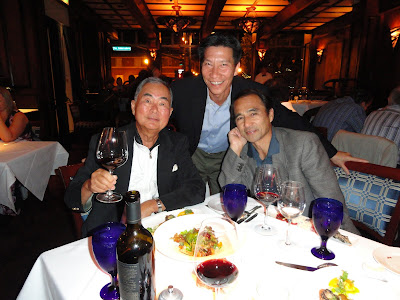 The four (Leighton, Sheridan, Guy and I) created the Blue Revolution Hawaii Manifesto (you need to scroll down to the second entry), while Leighton and I presented in November of this year a paper entitled, "The Blue Revolution:   Oceans as Ultimate Sustainable Resource," to the conferees at the Japan Eco Balance 2010 gathering in Tokyo.  In September I addressed the Japan Marine Technology Society with a talk on The Blue Revolution.

There is, of course, a long history associated with the Blue Revolution, a concept developed by a group of individuals, from U.S. Senator Spark Matsunaga, who introduced the first OTEC bill in 1979, to U.S. Senator Daniel Inouye, who articulated on the wisdom of the American Blue Revolution in 1992, to incoming Hawaii Governor Neil Abercrombie, all who have long supported what I think is most promising economic diversification pathway for the State of Hawaii.  It can't be only more tourism, nor outer space, nor traditional agriculture, nor fanciful high technology.   Certainly not more furloughs nor continued political bickering.   Hawaii is in the middle of the largest ocean, and the riches of the seas are our best hope for our future.

Step one for our Blue Revolution group will be an educational program to gain state-wide support for the ocean as a viable economic option for Hawaii, in harmony with the marine environment.  In time, there is a range of economic options leading to next generation fisheries, marine biomass plantations, green chemicals and biofuels, and, ultimately, sustainable ocean cities, with prospects for remediation of global warming and hopes for reducing the dangers of hurricanes. 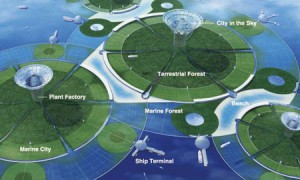 We are aware of the Shimizu Green Float plan, and are exploring opportunities for an international partnership, with Hawaii, hopefully, as an important site for early experimentation. Their ultimate ocean pod is designed to be 3000 meters (2 miles) in diameter.

David Nagaishi and his staff at Outrigger Reef's Ocean House Restaurant were accommodating and creative in making all the arrangements for our gathering.  Thank you David.
-
Posted by John Farias/ Dante Carpenter / Patrick Takahashi / Matthew Matsunaga / Leighton Chong / Kaiu Kimura / Benny Ron at 10:20 AM