The effluent would have very high mineral concentrations with a Redfield Ratio ideal for stimulating the growth of the total life cycle.  Marine biomass can be harvested for conversion into biofuels, and next generation fisheries can be supported. A “Blue Revolution” in the use of oceans as the ultimate sustainable resource has promising potential for a wide range of sustainable uses -- renewable energy, bioresource materials, integrated marine habitats, marine biomass plantations, aquaculture fisheries, ocean cities, etc.  Near-term technologies are being developed to enable ocean plantships to be deployed for ocean thermal energy conversion (OTEC) and aquaculture. These developments have the potential to provide significant economic returns and environmental benefits outweighing projected costs and ecosystem impacts.
Keywords: ocean, resource, OTEC, aquaculture
Introduction
The so-called “Blue Revolution” is much more than a marine version of the Green Revolution. This marine cornucopia encompasses a wide range of sustainable products -- renewable energy, potable water, bioresource plantations, next generation fisheries, biofuel products, green material and a variety of integrated marine habitats -- while in the process improving the ocean environment through, perhaps, cooling surface water temperatures to  prevent the formation of hurricanes and absorbing carbon dioxide to remediate global climate warming.
Twenty latitude degrees above and below the equator, the tropical ocean waters are currently considered to be a wet desert, for nothing much grows near the surface. This is because of a lack of nutrients. However, at 1000 meter depths is deep ocean water at 5 degrees Celsius with nitrogen and phosphorous concentrations at 100 times and 20 times, respectively, greater than what is generally found at the surface. This is because life in the photic or euphotic zone, where sufficient sunlight penetrates for photosynthesis to occur, eventually settles into the ocean depths and decomposes in the exact ratio as is required for life at the surface. The deeper ocean depth is cold because of natural convection from the Arctic and Antarctica.
Marine life in cellular form is said to be from two to five times more efficient in converting sunlight to biomass than any land crop (trees, grasses). Part of the reason is that land plants need to draw nutrients through a root system, while marine life can utilize the entire surface area contacting the aquatic environment.
The surface of our planet is 71% water. While we largely occupy only two dimensions on land, the average depth of the ocean is 13,124 feet. The oceans have vast potential for supplying clean energy, including windpower at sea, wavepower, tidal power, marine current power, salinity gradient, marine biomass, and ocean thermal energy conversion.

Conclusion
The Blue Revolution envisions development of our oceans as the ultimate sustainable resource with promising potential for a wide range of sustainable products, including generation of renewable energy, production of bioresource materials, creation of integrated marine habitats, production of marine biomass for biofuels, supplying mariculture seafood, etc.  Artificial upwelling of large volumes of pathogen-free, nutrient-rich cold water can be used for both OTEC power generation and stimulating marine life growth for aquaculture.  These near-term developments have potential for significant economic returns and environmental enhancements. 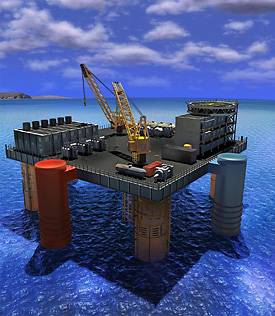 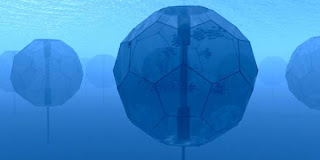