THE BLUE REVOLUTION IS THE OPTIMAL SOLUTION FOR JAPAN

Japan is back to square 1945, and will need to re-invent itself for the Year 2045.  It will take about that long to regain any kind of prominence, and only with the right decisions.
Clearly, Fukushima was only a repeat of Hiroshima and Nagasaki:  devastation symbolic of a nation on decline.  Obviously, nuclear fission will never become a major energy option for the country.

Japan is too crowded for biomass, not sunny enough for solar and has limited wind potential.  While the country is #2 to Germany in solar photovoltaic cell sales, the fact of the matter is that, like the rest of the world, the total amount of renewables used today is far less than 5% of the total, with most of this being hydroelectric power.  Anyway, the winds and sun are intermittent, and can safely be accommodated only up to 20% the electricity load. What can they do about the remaining 80%, plus, ground and air transport requirements?  This challenge, actually, is also faced by the rest of the world, but Japan has to address this matter right now. 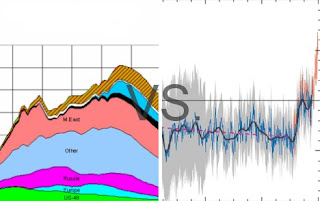 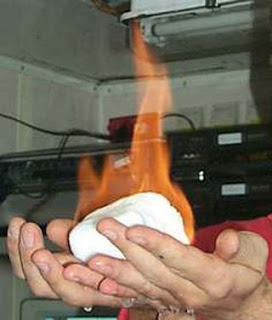 First, it is easy to recommend that they forget more fossil energy.  There will soon be something like a carbon tax for coal, as global warming won't be ignored for too much longer.  Mind you, nothing much will happen for as long as a decade, but someday, when the crunch of Peak Oil and Global Warming results in something catastrophic,  steps will haphazardly be taken.  Japan does have some potential for marine methane hydrates (MMH, seen left burning), but the costs will be astronomical and, although there could be twice the amount of energy in these deep sea deposits compared to all the known coal, oil and natural gas resources, MMH is too dispersed and difficult to harvest.

Second, geothermal energy seems attractive, for onsens can be found throughout the country.  Their current geo-production is on the order of 500 megawatts, around half that of one typical nuclear power plant.  So even if they can increase geothermal electricity by a factor of 10 (and this won't happen because very little of this resource approaches the temperatures needed to make the effort worthwhile) they won't even match the production of those nuclear facilities now decommissioned in and around Fukushima.
Third, become truly serious about energy conservation.  Room fans are flying off the shelves, so people are already anticipating an uncomfortable summer.  Escalators and many elevators will no doubt be halted, major cities will become dark at night, companies will face a long recessionary period and life will soon be supremely inconvenient for the populace.  But the character of the nation is such that they will overcome. 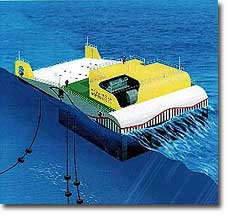 Finally, the ocean is the obvious solution for Japan.  They don't have much in terms of current, tidal and salinity gradient resources.  Waves are possible, and this country has had several pioneering projects (Mighty Whale to the right), with yet another one being planned.  Certainly, continue this development, but I've long worried that this option will never become truly competitive, mostly because of the cost required to protect these devices from major storms. 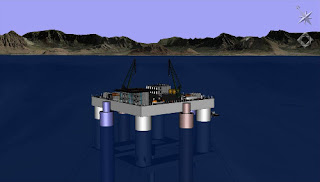 Ocean thermal energy conversion (OTEC) remains as the best marine alternative.  Japan's only successful experiment, led by Toshiba and Tokyo Electric Power Company, occurred thirty years ago on Nauru.  Unfortunately, yet another natural disaster, a hurricane that time, wiped out the effort.  OTEC can be used to power a grazing plantship, where the economic opportunities would include:  next generation fisheries, marine biomass plantations (from which methane and various biofuels can be produced at sea), electricity (from which hydrogen can be electrolyzed) and freshwater.  Certainly, these platforms can be utilized to capture the the sun and winds, too.  Of particular intrigue is the potential to prevent hurricanes and remediate global warming. 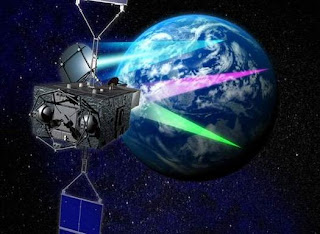 Yes, there are, further, at least two exotic options:
1.  Solar power plant in space, with Japan already leading the R&D of this option.  But at $21 billion to provide electricity just a fraction of a nuclear facility, the costs are way too high.
2.  Nuclear fusion remains a long term option.  Japan is leading the international consortium on materials research for this pathway, but commercialization could well be in 2050, and only with much luck. 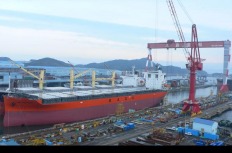 So, faced with the need to make immediate decisions, the sea around them represents the future of Japan.  It was once the top shipbuilding nation.  South Korea replaced them eight years ago, and China looms to become #1 in 2015.  However, Japan has the basic infrastructure to build those floating platforms, and can thus best return to prominence through the Blue Revolution. 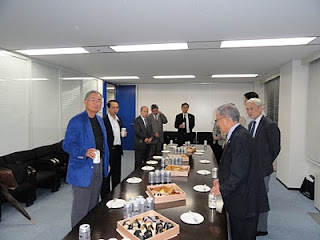 During the past two decades I have provided at least a dozen lectures in Japan to spark interest in the ocean as an ideal project for international cooperation, most recently to the Japan Marine Technology Society.  The opportunity is now at hand for the country to take the leading role in partnering with the world to develop the Pacific International Ocean Station (PIOS), the proposed ocean version of the International Space Station (ISS).  This space effort cost more than a hundred billion dollars, but produced, essentially, nothing. 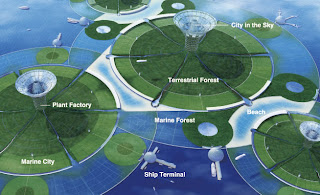 The organizers of Blue Revolution Hawaii have already discussed Japanese participation in PIOS, for Shimizu's Green Float concept (left) is very similar to our vision.  Suddenly, the Great Tohoku Earthquake, Tsunami and Nuclear Disaster has thrust the Blue Revolution as the optimal solution for Japan's future.  For one percent the cost of the ISS, PIOS can establish a marine pathway for economic progress, not only for Japan, but the rest of the world.  Japan can assume the leadership role for this magnificent global enterprise, and take that important step towards a progressive recovery.
-
Posted by John Farias/ Dante Carpenter / Patrick Takahashi / Matthew Matsunaga / Leighton Chong / Kaiu Kimura / Benny Ron at 9:57 AM